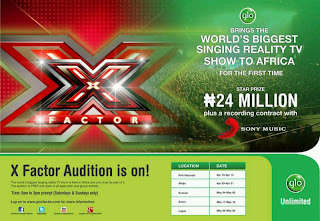 Auditions will begin this weekend in Port Harcourt in the world’s number one music singing talentl reality TV show, “The X Factor”, brought to Africa for the first time by leading telecommunications company, Globacom. Head of Reality Shows of Globacom, Sulyman Bello, said in a statement issued in Lagos that auditions to select those who would participate in the show would be held at the Presidential Hotel, Aba Road, Port Harcourt, from April 13, to Sunday, April 14, 2013. The X-Factor crew will move to the Federal Capital City the following week for the Abuja auditions which will take place at Ladi Kwali Hall of Sheraton Hotel, on Saturday and Sunday, April 20 and 21. Bello stated that the Lagos auditions would come up on the weekend of May 25 and 26. It will be held at Dream Studio, No.1 Bamako Street, Omole Estate, Ojodu. All the auditions will be held from 9 a.m. to 3 p.m. on the stated days. X-Factor is a Reality TV singing competition designed to find new talents. It is contested by aspiring singers, drawn from public auditions and is open to all ages, sex, styles, solo acts or groups. The other stages of the competition include the auditions, in front of an audience; the evictions; the judge’s day and the grand finale. It has been successfully launched in major countries including UK, the United States, Albania, Argentina, Australia, Belgium, Denmark, France, Germany and Spain. Glo is making history as the first company to bring the show to Africa. The ultimate winner of the showl will cart home a princely sum of $150,000 (N24million), the biggest purse among current music reality TV shows. The winner will also get a recording contract with the internationally acclaimed Sony Music for the recording of an album and professional management of the winning individual or group. A major difference between the show and others is that the judges also double as coaches for the various groups. It is peculiarly split in stages, following the contestants from auditions through to the boot camp, the judges’ homes; to the grand finale. According to Bello, “This year marks the 10th anniversary of our operations and this programme is, in part, our modest way of thanking our subscribers for their loyalty and patronage”. Accra and Kumasi in Ghana are also scheduled to
host the auditions. The X Factor, a Syco-owned format, is produced and distributed worldwide by Fremantle Media. Informations like this and more are always available at concept forum. Bulksms as low as 70kobo is possible @ www.websms247.org If you like this share it in any of your social networking platform. To contact us use our contact page or Email info@vesterconcept.org
your world of solutions
Share on:
WhatsApp